There’s a first for everything. Today was the first day I used the new Moto 360 on a normal workday. For those who don’t know what that is, it’s Motorola’s take on a wearable smart watch. Powered by Android Wear, this wearable stood out for me because of its classic circular front face. It’s a familiar face to a new technology.

Usually I ride the Microsoft connector, a shuttle bus, to work. This morning I ran into my coworker. We sat on the bus together and after a few minutes of chatting, he noticed my smart watch. I started telling him my weekend experience with it. He mentioned its just another device to make people more rude in public. As he was talking I get an email notification, I quickly glance down at my wrist, check the notification and seamlessly hop back into the conversation. My coworker even commented on how it wasn’t as obstructive as he imagined it would be compared to taking out your phone to check your notifications.

One thing I noticed is I look at my phone about 70% less today. The glance at a notification was enough for me to quickly decide how important that email or calendar invite is. I enjoyed how when I’m walking to my next meeting I quickly check my notifications and decide those work emails aren’t urgent and I can continue with my day. I did get an email from my wife which I responded to with voice. It was a super short message and I never had to look at or touch my phone.

I am a big advocate of voice interaction (a big reason I switched to Android from iOS, Motorola specifically for Moto assist). The times I had to take out my phone was when it was to loud to use voice or it wasn’t an opportune time like during a meeting or in the restroom.

It felt like a secretary telling me my new messages and I could decide to respond or continue what was doing. I love glancing as it’s a faster interaction with minimal effort. 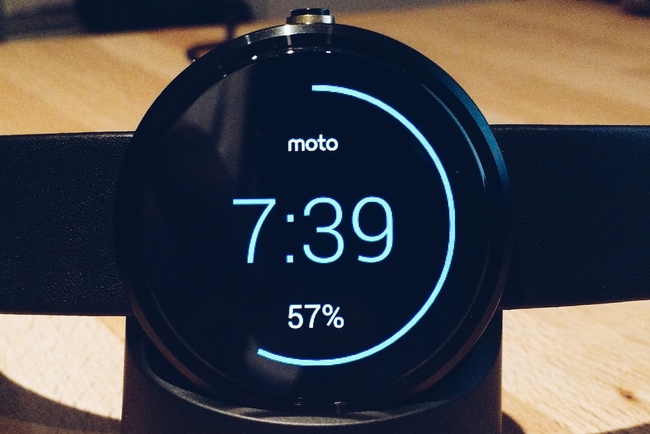 I ended my workday at 50% battery on the Moto 360 which is great. I had heavy usage from personal emails, work emails, meetings, football scores and weather notifications. My new Moto X was around 60% battery by 7:30 PM. Overall, a great first day with Motorola and Android.

“They say that one of the best business plans you can have is to identify a product or a service that you passionately want, but that does not yet exist. The chances are that millions of people around the world will want it too, and your... Continue →